The Saga of two Robert Mackneys

Back in 2008 I was contacted by Lesley Holdsworth nee McNair regarding her ancestor Robert Mackney.

Lesley was convinced that there was a connection between ‘her’ Robert Mackney and mine.

She had heard from her father about the connection to travellers and Mackney’s ghost pavilion.

In those early days we focussed on trying to make the two Roberts into the same person, but to no avail.

Their dates of birth were the same c. 1865, their place of birth was Leeds, but beyond this there were too many differences, especially after 1901 when they both appeared in different censuses.

We have remained in contact on and off over the years; but whilst we could find a lot of detail on both Roberts, we couldn’t join them.

In February of 2021 Lesley suggested that ‘her’ Robert Mackney could in fact be Robert Henry Horn.

Robert Henry Horn was the son of Henry Horn and Elizabeth McNair. Elizabeth was the daughter of James McNair with Mary Wilton.

In the 1871 census the Horns are living in Holbeck, Leeds and they have a boarder, Elijah McNair Wilton. Elijah was Elizabeth’s half-brother.

Lesley’s theory was that after Robert’s parents died (1876 & 1880) he changed his name from Horn to Mackney (or one of the variants).

This opened up a new area of research to look into.

In 1881 Robert is still Robert Henry Horn and still living in Holbeck. He is a warehouse boy lodging with a family called Lister; he is aged 14.

At this point the trail had gone dry.

We had Robert Henry Horn from his birth to 1881 and we had Robert Mackney from 1894 when his first child, Hepzibeth, was born, up until his death in 1918.

It was decided that we would try and find Robert Henry Horn after the 1881 census to try and see if he was still around.

Eventually there was one of those flukes that occur from time-to-time.

In April 1907 Robert Henry Horn is admitted to one of Liverpool’s workhouses (probably into the infirmary). He clearly gives his name as Robert Henry Horn. His wife is mentioned as next of kin but not named.

However, there was another entry for him in the same year, but this time he is indexed as Robert Henry Horn or Macking.

Looking at the image it is Mackney, not Macking.

His wife is named as Mary Alice Mackney.

That was the confirmation we had been looking for all these years.

There is also mention of an uncle as next of kin but I can’t make out the surname, nor does any name come to mind: 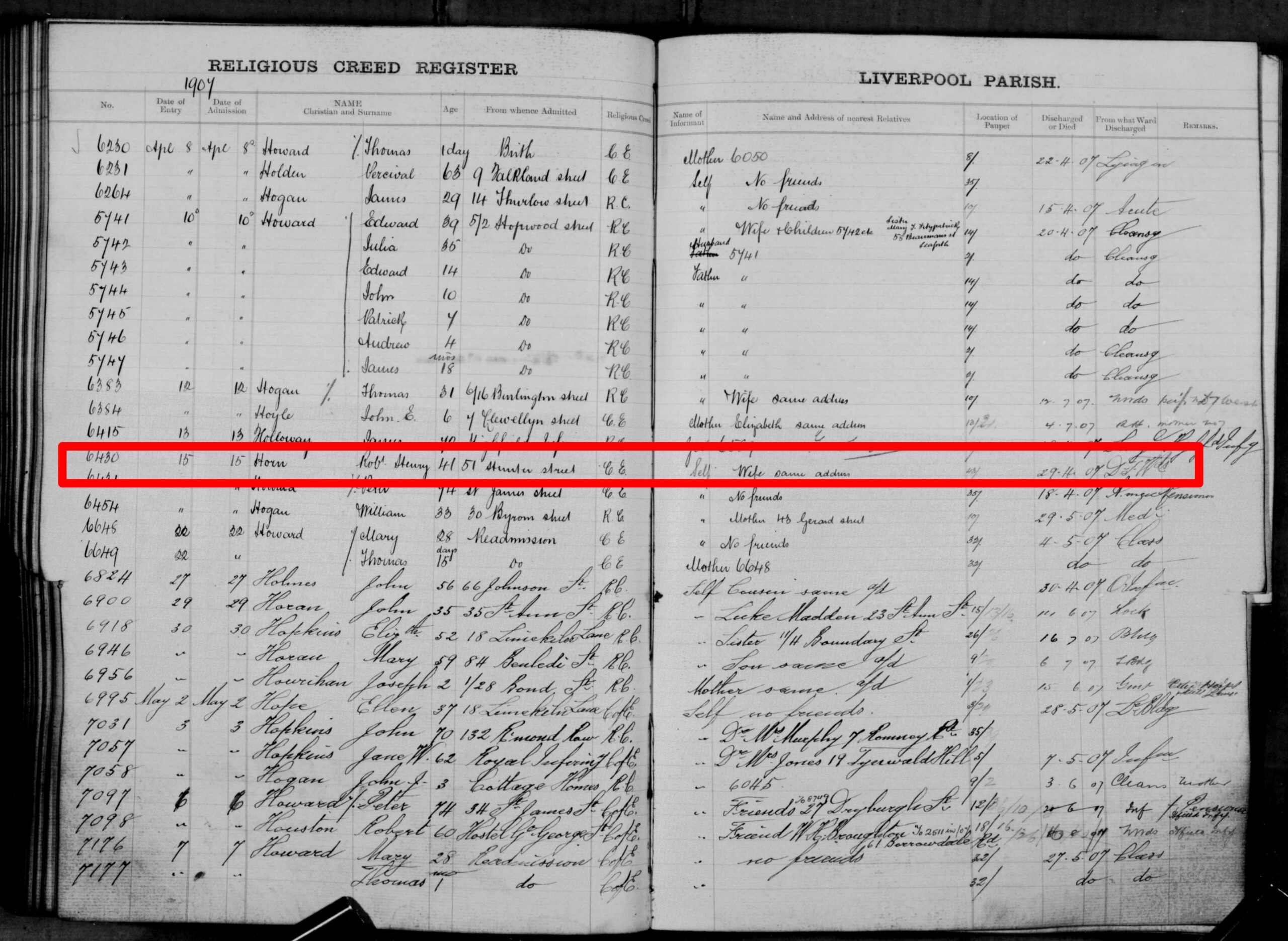 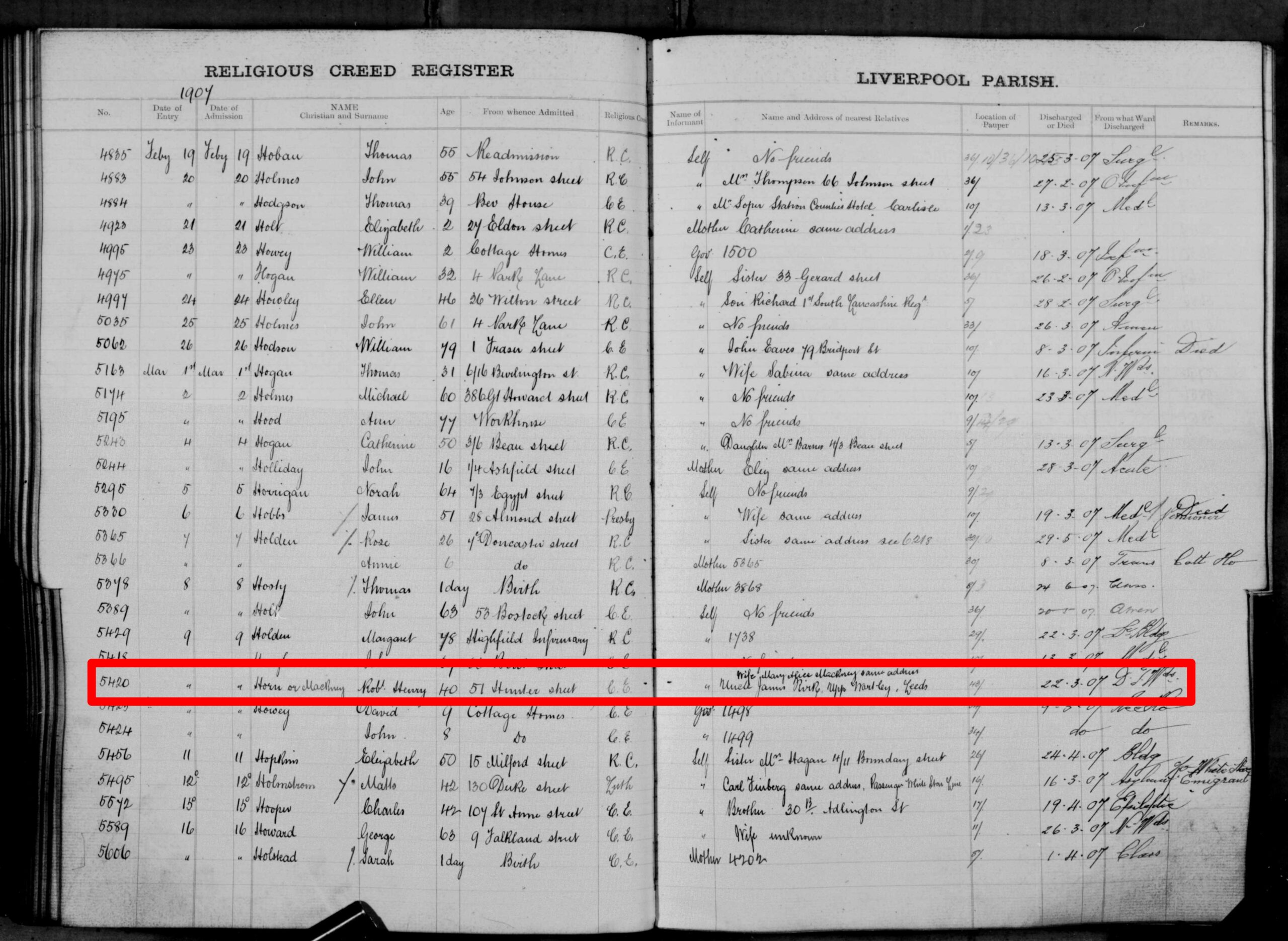 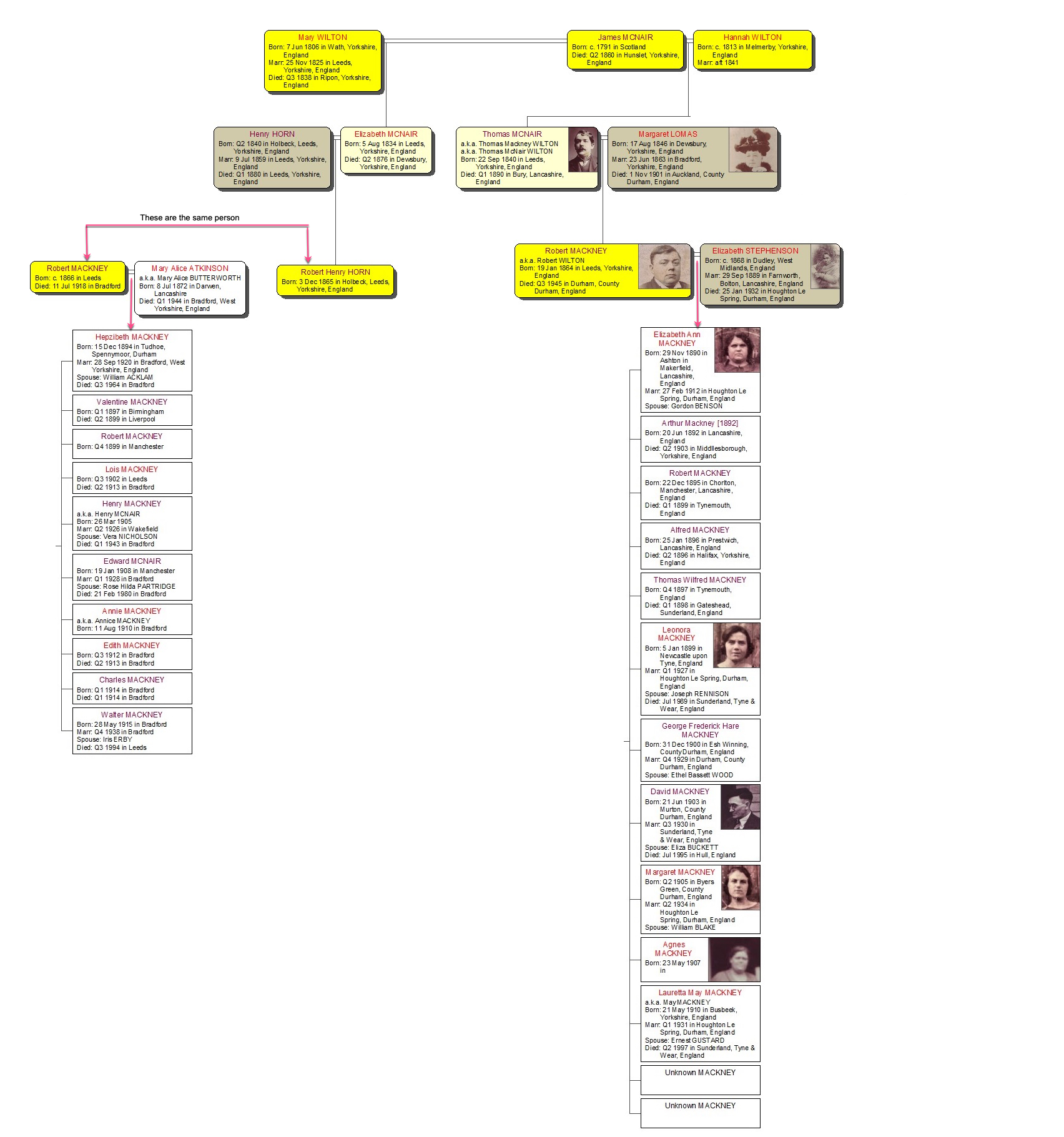