The original act was known as ‘The Lomas Troupe’ and was formed by Robert Lomas.

The earliest entry that I have found for the act was in The Era on the 7th September 1895, at which time Bob would have been 23.

Prior to this we don’t know if he actually performed with his parents, but I suspect that it is likely.

His mother re-marries in the same year, to Peter Broadbent, a Hardware Merchant.

Two years later in the 1891 census, Bob is working in his step-father’s hardware business.

At present we have very little definitive information as to who were members of the troupe although it seems to have mainly been family members.

At least two of his brothers (Richard & William) were members and also his wife. Whether Margaret was there from the beginning I don’t know, but they married in 1896 just a year after the first entry in The Era. Margaret had been an actress for many years. She was listed as an Actress in the 1891 census, aged 13.

As time goes on there are more and more entries of the name in The Era:

In between 1897 and 1901 they included a bird act performed by Fred Bithell. Grace Beauty & Banjos - Extract

The latest date that I have in The Era for The Lomas Troupe is 28th April 1920 (but this includes the post Pender period).

Perhaps the most famous thing about the Penders was their connection with Cary Grant.
Grant, under his birth name of Archibald Leach was a member of the troupe and travelled with them to America in 1920. For this reason the name Pender occurs in most references to Cary Grant.

The Pender Troupe appeared in pantomime at Drury Lane Theatre
There were about six of them and they performed on stilts.

Bob Pender had been famous as a Drury Lane clown. His wife Margaret was a dancer, and reputed to have been ballet mistress at the Follies Bergere.
The group did mime, dancing, tumbling and stilt-walking.
The troupe toured the English provinces and played the Gulliver chain of music halls in London.

The Lomases lived in Brixton.
Bob’s wife, Margaret, a one time ballet master at the Folies Bergères in Paris (yet to be proven) and trained as a ballerina by Katti Lanner of the Empire, Leicester Square, was also involved with the work and management of the troupe.

It was in pantomime where the Penders had some of their greatest success, reportedly appearing in 10 successive Drury Lane pantos and Margaret was also a pantomime ballerina at Drury Lane for several years.

Certainly in the 1907-8 “Babes in the Wood” the Pender troupe of Giants appeared, and in the 1910-11 production of “Jack and the Beanstalk” where they were giant storks.

Before World War 1 Pender’s troupe appeared in a couple of early Gaumont silent short films. In 1904 “Hands Up” was a 3 minute farce in which old highwaymen on hobby horses robbed a stage coach and in a 1910 short film “Travelling Stilt-walkers” they appeared as stilt-walking buskers who save a child from a burning house.

In 1911 the troupe were performing at the opening of The Folies Bergere Club in New York. The Lives of Justine Johnstone - Extract

Doris Pender joined the troupe of Little Dandies in 1912 appearing at the Camberwell Palace as well as later touring in the US where the troupe appeared in shows with Eddie Foy and the 7 Little Foys. When Pender retired in the mid 1920s to Southend where he ran a novelty store, Doris (who had married Jack Hartman [possibly Henry John Hart1], a comedian, together with Chuck O’Neill) formed a comedy act Hart, Pender and O’Neill which appeared in variety. Bob Pender died in 1939 and Doris died of leukaemia in her London home in 1975.

One of the features was the use of a star trap, often by Will Compo (William S Power)

When a sudden, mysterious appearance is required, a star trap is used. The star trap is a circular opening with a lid composed of wedge-shaped sections, individually hinged to the circumference. An actor, standing below on a heavily counterweighted platform, can be projected through the opening with great speed. The sections of the lid are pushed up as he passes and immediately fall back into place, thus concealing his point of entrance.

In July 1920 the Penders sailed on SS Olympic to appear at the Globe Theatre in New York, the act was switched to the Hippodrome and ran for 456 performances of their show “Good Times”. They went on to a 6 month tour of the Keith vaudeville circuit that took them to Chicago, Philadelphia, Boston etc. In mid 1922 the tour ended with an appearance at the New York Palace. Of course this is where Cary Grant and one other (less famous) member left, seeking their fortune. I read that Bob Pender gave them their fare home, just in case.

The cast of the Harlequinade was Will Pender, Joe Pender, Maggie Pender, Will Compo and T & G Pender.

Robert and Maggie Lomas sailed on the Aquitania arriving in New York on 22.02.21. Their next of kin was listed as Mrs Ratcliffe, 40a Barker St, Oldham. 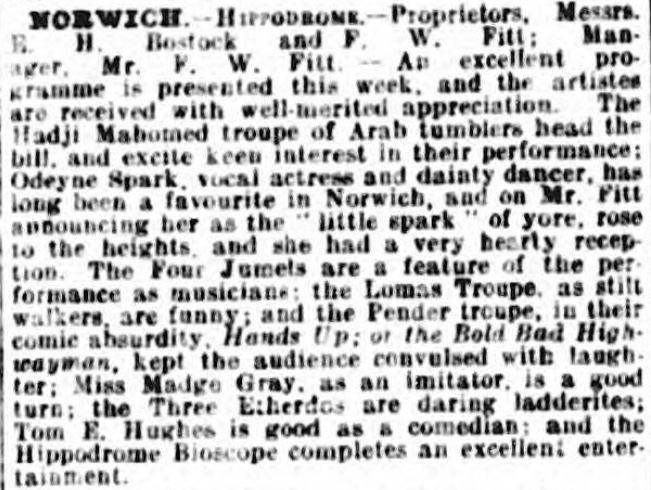 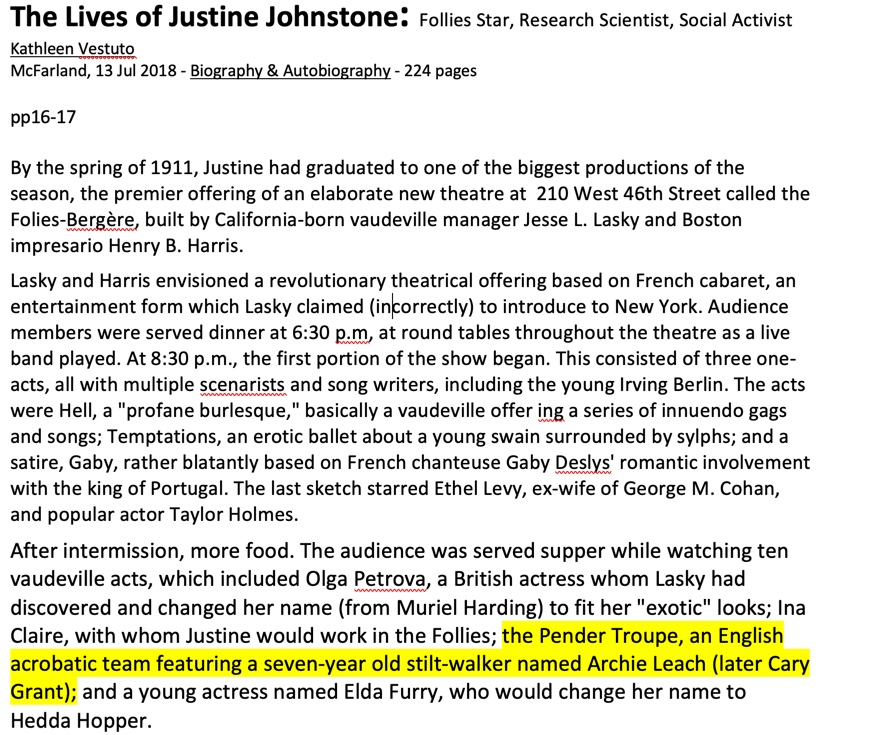 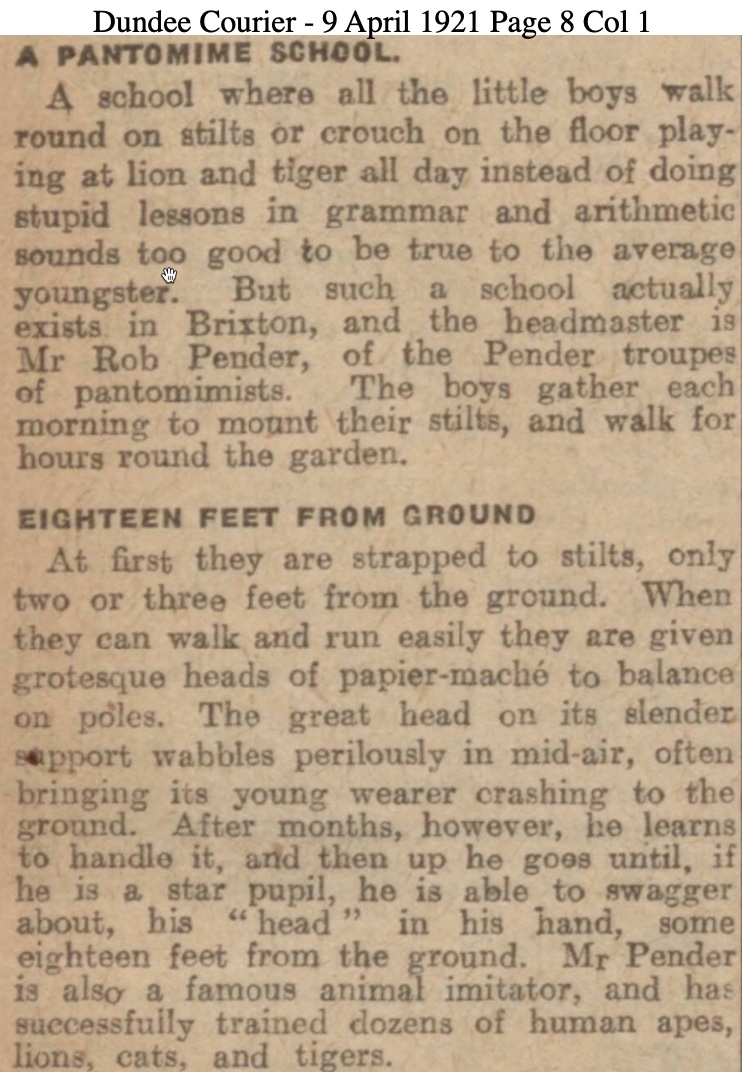